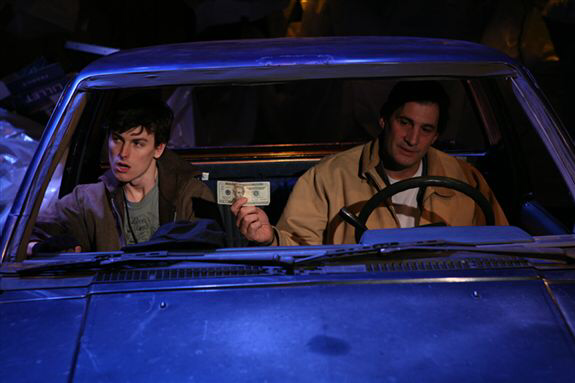 This was the second Working Man’s Clothes production done under their Lost Works project—a program for renowned plays that had never received a NYC production because of difficult or shocking subject matter.

Fresh Kills had premiered at the Royal Court in London but even though Elyzabeth Gregory Wilder was a well produced playwright in the US, the play had never been done here.

We cast Robert Funaro (The Sopranos, American Gangster) in the lead role, assembled a stellar supporting cast, and then spent weeks trying to figure out how to get an entire pickup truck up to the second floor of 59E59 with no freight elevator. It was worth it to see people’s faces when they walked into theatre and tried to figure out how we got the truck in there.

“reminiscent of top-notch TV drama, but with a lot more emotional honesty.” Flavorpill

"an enormously effective production I challenge even the most cynical theatergoer not to be seduced by...a fantastic staging concept...great acting...Isaac Byrne takes an enormous risk...but it pays incredible dividends...on the edge of my seat... an enormously satisfying theatrical experience. Theater is Easy

“Fresh Kills captivates with its gritty dialogue, tension-filled interactions and dramatic plot twists…the most shocking aspect of the play is its relatability…edge-of-your-seat kind of entertainment” Showbusiness Weekly

"Byrne...gets the most out of his talented cast" Broadway World

"Impressive...Isaac Byrne did a fine job directing the piece... it was as if you were right there with the characters as the story was unfolding” NYTheatre